In the summer months, the former fishing village of Saint-Tropez swells in size as jet setters cruise into the Vieux Port, docking their shiny yachts in front of landmark cafés that have been sitting here well before the 1950s, when sex-symbol Brigitte Bardot came sauntering in. Her film, Et Dieu… créa la femme (And God Created Woman), helped propel the petite peninsula into the global spotlight and made it a requisite stop on the Mediterranean for celebrities in summer.

And while Saint-Tropez’s bohemian-chic image hasn’t faded in the time since (in the 1970s, models and rockstars like Mick Jagger and Grace Jones held court in the exclusive, still-standing Caves du Roi at Hotel Byblos), it’s drawing a crowd other than A-listers and day trippers hoping to get a glimpse of Bardot’s home. Pop-up wine tastings, new natural wine bars and chef-driven eateries are adding to the fabric of the resort town and infusing that much-needed local touch.

Why go to Saint-Tropez?

The cobbled, pedestrian alleys crisscrossing through the Old Town, or ‘La Ponche’, separate the harbour from the Place des Lices, where century-old plane trees add the slightest bit of shade to the sandy pétanque court in the centre. The main square gives way to a twice-weekly open-air market, where vendors pedal everything from produce and pastries to linen clothing that’s the unofficial uniform of choice in town.

From La Ponche, a seaside path winds its way along the water, following the rocky coastline to one of the lesser-visited beaches in Saint-Tropez, the pine tree-shielded Plage des Salins. If you’ve come for the full Saint-Tropez scene, make the 15-minute drive over to Pampelonne beach and take your pick of swanky beach clubs all of which are huddled together along the coast.

The majority of restaurants may be transplants from cities and islands just as flashy (think St-Barths and Monaco), but the cuisine throughout Saint-Tropez blends the best of the Mediterranean and Provence. Celebrity chefs deconstruct classic Niçoise salads, while Old Town bistros and cafés serve up traditional dishes like daube, a wine-braised beef stew, and vegetables stuffed with minced meat (a street food specialty called farcis niçois). And since Saint-Tropez sits in the heart of Côtes de Provence, it’s the perfect base for exploring the surrounding land of rosé, with vineyards as close as 20 minutes from the Old Town.

My perfect weekend in Saint-Tropez 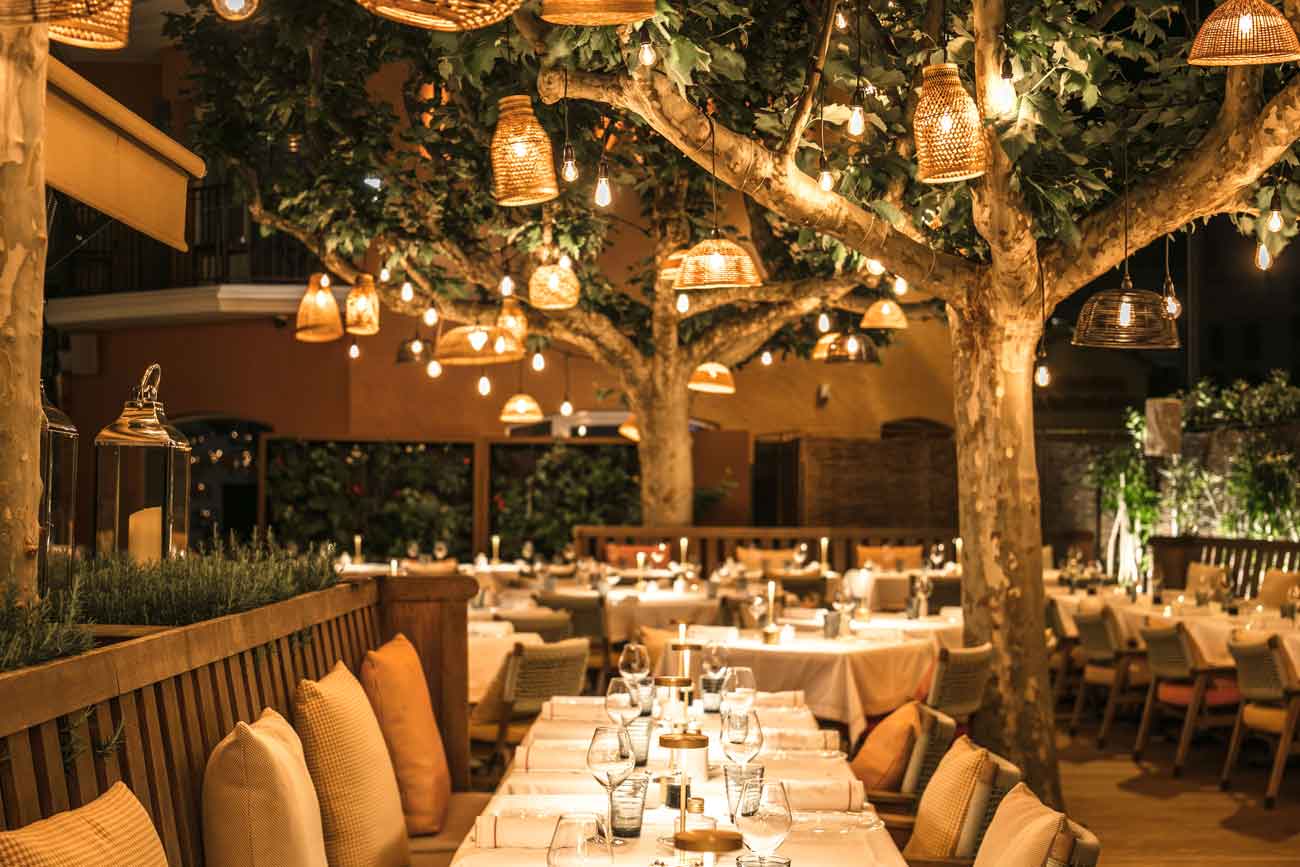 Drop your bags at Hotel Byblos, which has been the go-to spot in Saint-Tropez since it opened in the 1960s (and where Mick Jagger held his wedding party when he married Bianca). Designed as a village-within-village, the hotel sits just off the Place des Lices, so it’s in the ideal location for quick treks into town. Take a five-minute walk to the port and climb the stairs up to the lounge at Le Sube, a favourite for its relaxed, nautical-meets-cigar lounge vibe. Despite being one of the few no-frills spots in Saint-Tropez (locals gather year round for weekly karaoke), the wine list is on the more sophisticated side – and you can enjoy a glass on the terrace overlooking the yachts gently bobbing in the water below.

Leisurely make your way down to the port and post up in one of the cherry-red chairs on the terrace of Café Sénéquier to people watch over a cappuccino and croissant before setting off on a wine tour around the region. Greeks planted the first vines here around 600 BC, and now there are more than 200 hectares of vineyards lining the peninsula’s plains and hills. In and around the Gulf of Saint-Tropez, you’ll find more than 30 wineries that offer tastings, including rosé heavy-hitter Château Minuty, which has been run by the Matton family for four generations, and the ultra-modern Château Saint-Maur, which produces both its own wines and, more recently, has collaborated on La Fête du Rosé. Taste by the glass (or bottle) in the outdoor wine bar, La Terrasse, which is surrounded by vines and views of the village of Grimaud. You can also arrange tours and tastings (or direct-to-villa or yacht deliveries) through newly-opened wine shop Cave 1990 back in town.

Head for a late lunch at the iconic Le Club 55 on Pampelonne beach in Ramatuelle, about a 30-minute ride away. This expansive eatery unfolds under a straw roof, and despite it topping the list of places to see-and-be-seen, it’s more toes-in-the-sand island beach bar than upscale seafood eatery (the prices, however, suggest otherwise). Linger over the Club 55 rosé and grilled catch of the day before making your way down to one of the beach chairs or mattresses lining the sand.

Take a 15-minute taxi ride back to Place des Lices and stroll through La Ponche until you wind up at Pan Deï Palais, a private residence-turned-boutique hotel where you can pause for a drink in the walled garden. Window shop on your walk back to Byblos, and enjoy an aperitif at the poolside lounge bar before going down the staircase to Italian trattoria Cucina by Alain Ducasse for dinner. Take a seat on the romantic terrace dotted with lantern-lit trees and make your way through a market-fresh menu that champions the best of Italy with local ingredients (you can’t go wrong with the oven-roasted whole sea bass with olive and tomato confit).

Even if you’re not a fan of sweets, you can’t leave Saint-Tropez without trying the signature tarte tropézienne, which you’ll find at patisseries and restaurants around town. Sample the original cream-filled brioche pastry at La Tarte Tropézienne on the Place des Lices before perusing the Saturday market, which runs from 8am to 1pm. After picking up a few souvenirs, head back towards the hotel and climb up to the 17th-century citadel for sweeping views across the village’s signature, orange-tiled roofs.

Take a ride about 20 minutes across the peninsula to Indie Beach. The bohemian beach club and restaurant is more laid-back than some of the others in Ramatuelle, so the focus is less on a party scene with sparklers and over-the-top performers. The food is the opposite of what you’d expect from a beach bar, meaning a beautiful mix of Mediterranean mezze, whole fish, and Italian classics like spaghetti vongole.

Reserve a spot at Fondugues-Pradugues’s summer wine tasting pop-up, L’éphémère, about a 20-minute ride from town, near the beaches. Sample (and buy) a few of the winery’s organic rosé and chillable reds at tables under the pines while dining on plates designed around ingredients found in nearby farms and markets (think vegetable fritto misto and ris de veau, or sweetbread, with labneh and coriander).

Take one last morning stroll through town and snag a table at the no-reservations natural wine bar Mamé for one of the more inventive brunch menus you’ll find on the Riviera. Order a flat white and the house cocktail (a mimosa mixed with pét-nat) and dig into a mix of sweet and savoury dishes like shakshuka and pancakes topped with bananas and pecans. Before heading off, make a final stop at La Cave Da Vinci Code, near Place des Lices, where the ageing cellar (by appointment only) is filled with more than 35,000 bottles from around the world. 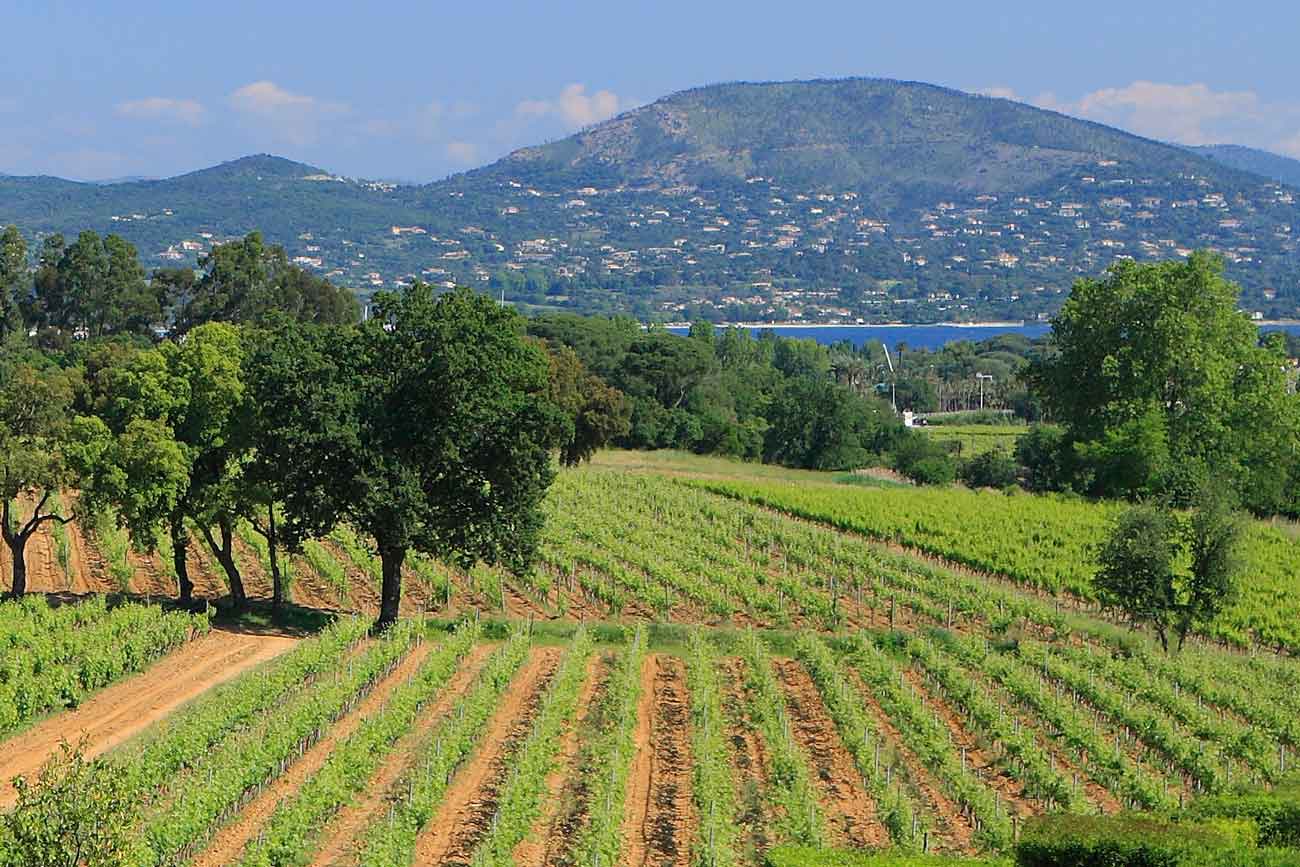 Your Saint-Tropez address book: Where to stay, eat and shop

If you want to be slightly removed and don’t mind a splurge, this is the spot for you. Larger groups or families can post up in multi-room villas with private pools or book one of the junior suites with sea views. Treat yourself to dinner at the two Michelin star La Voile, where chef Eric Canino has designed an elevated menu of surf and turf. 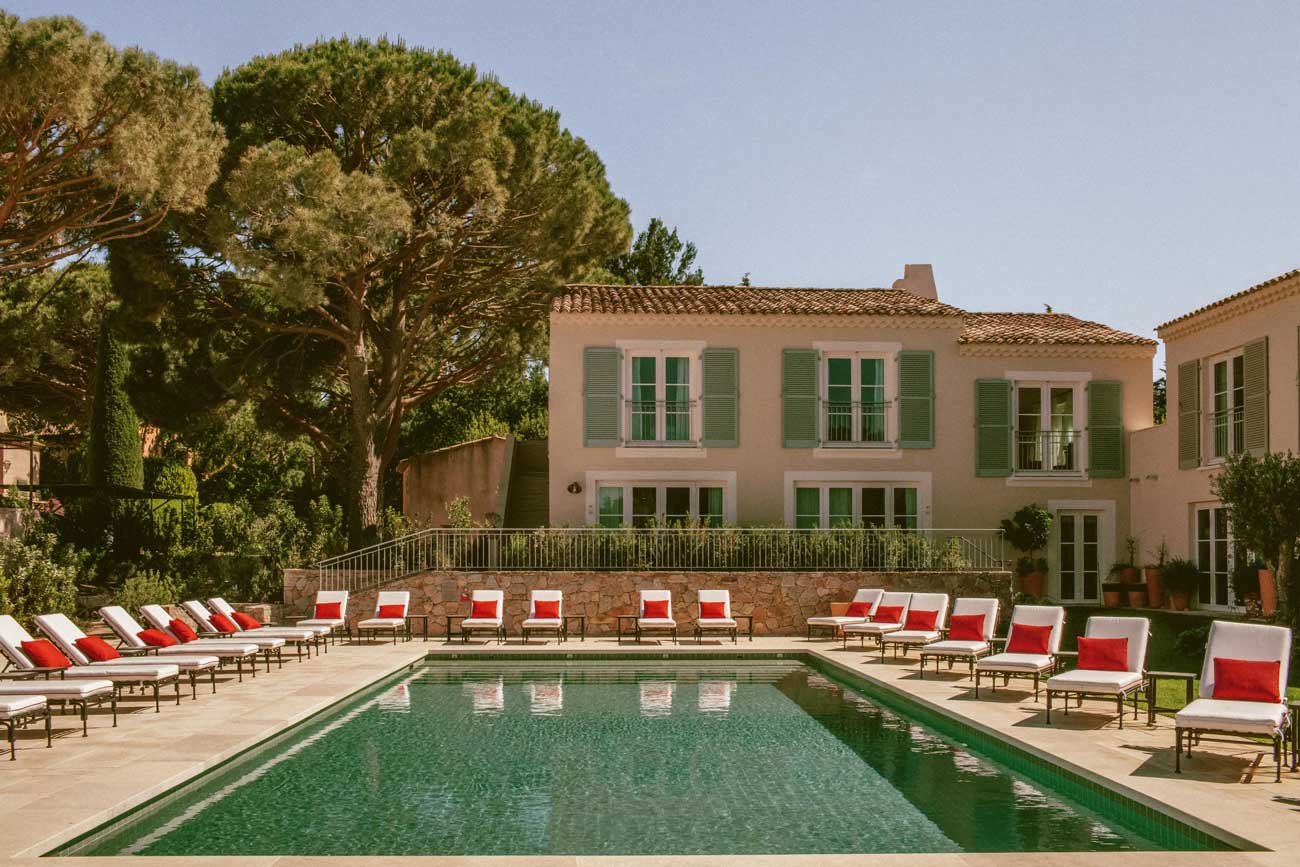 Charles Zana, a.k.a. the ‘architect of Mediterranean chic’, is behind the design of this tucked-away boutique hotel, which is about as ‘off the grid’ as you can get in Saint-Tropez. With only 34 rooms – a handful of which open up to the centrepiece pool – it feels like a villa in Provence, yet sits right between the city’s beaches and Old Town.

Cylindrical paper lanterns dangling from the trees add a touch of Tokyo to the garden setting, which is swathed in shades of terracotta, gold and coral. Go for the robata dishes like the lobster with shiso butter ponzu sauce and pair it alongside one of the hundred-plus bottles of carefully-curated wine.

Encased in a forest of bamboo, La Sauvageonne feels like a Tahitian beach bar that’s something of a local secret. Come for dinner and stay as the music and dancing pick up throughout the night.

The menu is heavy on classic cuts of meat from around the world, but nothing is too fussy – the beauty of Beefbar is that the meat is prepared simply, so it truly shines. Global influences include elevated shawarma and Korean bao buns, but even vegetarians will find a few standout dishes on the menu, like the super kale salad and truffle cream-topped pizza.

The courtyard of the Moroccan eatery feels like it was plucked out of Marrakech, and the indoor cocktail bar – which heats up later in the evening as the DJ starts spinning – serves up some of the best drinks in town.

Considered the oldest sandal shop in town, Atelier Rondini handmakes leather sandals that have become symbolic of Saint-Tropez. The atelier is still attached to the boutique, so you can get your new pair adjusted to fit your feet perfectly.

The century-old concept shop acts as an urban bazaar with everything from chic espadrilles and beach robes to ceramics and natural soaps.

The family-run patisserie near the port, helmed by Lenôtre-trained Laurent Cavazza (grandson of the founder), is known for its stand-out, orange blossom-tinged tarte tropézienne. 21 rue Georges Clemenceau; 04 94 97 83 53

How to get to Saint-Tropez 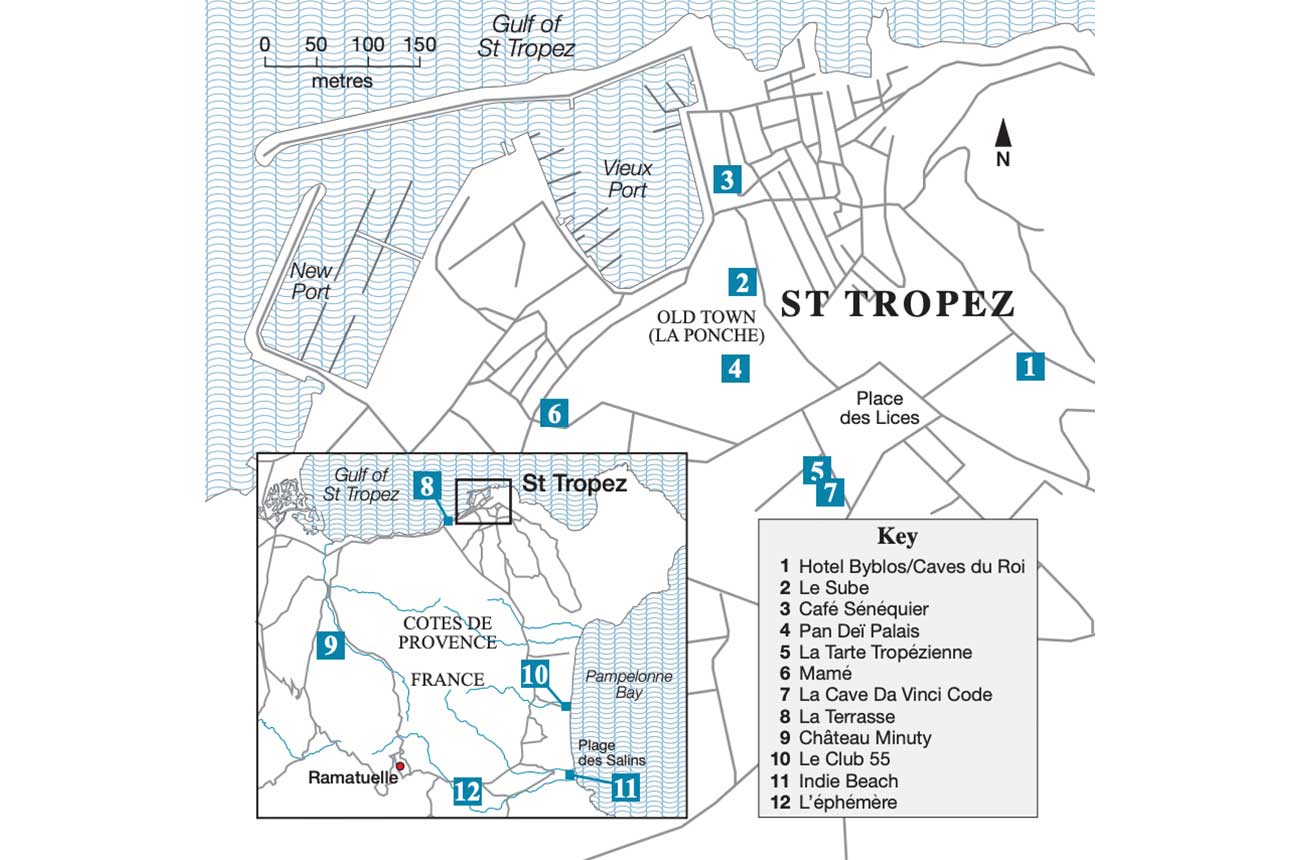 The easiest way to get to Saint-Tropez is to fly to Nice, and then making the drive (which takes around an hour and a half, if there’s no traffic). The smaller Toulon-Hyères airport, which has direct flights to London and Paris, is a little over an hour’s drive from Saint-Tropez.

Lane Nieset is a freelance travel writer and editor from Miami who has been living in the south of France and Paris for the past decade.

A perfect weekend in the Jura

A wines lover’s guide to Sauternes

A perfect weekend in Beaune

How to Freshen Up Cocktails With Seasonal Produce, According to Top Bartenders

The VinePair Podcast: Where Is the Market for Craft Vodka?

8 Things to Know About Oktoberfest

Celebrate the Fall Season in Central Oregon with...

A perfect weekend in Montpellier